Design and Implementation of an Electronic Voting System

The purpose of this paper is to discuss the challenges as limitations to the current electoral system in Nigeria’s democracy, proffering possible way forward. The flawed electoral process of the last two Presidential elections equally calls for technology- enabled solutions to this social malaise which could lead to chaos and anarchy if nothing is done to forestall these electoral menace in future elections. Electoral fraud perpetuated in the cause of political activities including pre-election and post-elections periods such as multiple registration, invalid voters register, multiple voting, poor organization of electoral process, violence, ballot stuffing and snatching, logistic and administrative constraints. This paper takes critical steps to addressing these numerous elections vices in Nigeria’s electoral system, with the aim to provide a viable option that would ensure credible, fair and genuinely acceptable elections in the country, in the foreseeable future. An IT-driven  voting, otherwise known as e-voting has been developed for implementation in this paper. Keywords: Elections, Electoral Process, Commission, Database, Election Violence and Voters.

This paper discusses the design and implementation of an electronic voting system database application with WAMP SERVER. It also discusses the issues of selecting appropriate database model, interface design, system deployment and maintenance. A projection of record growth in relation to student population and system requirement was carried out in the study. Finally it discusses the applicability of the system in academic institutions. The Programming language used in developing this application is Visual Basic.net 2012. It runs in Windows 98 to Latest windows 8.

1.1 BACKGROUND OF THE STUDY

Electronic voting technology can include punched cards, optical scan voting systems and specialized voting kiosks (including self-contained direct-recording electronic voting systems, or DRE). It can also involve transmission of ballots and votes via telephones, private computer networks, or the Internet.

Electronic voting technology can speed the counting of ballots, reduce the cost of paying staff to count votes manually and can provide improved accessibility for disabled voters. However, there has been contention, especially in the United States, that electronic voting, especially DRE voting, could facilitate electoral fraud and may not be fully auditable. In addition, electronic voting has been criticised as unnecessary and expensive to introduce. Several countries have cancelled e-voting systems or decided against a large-scale rollout, notably the Netherlands and the United Kingdom.

1.2 STATEMENT OF THE PROBLEMS

Nigeria is a country with device ethnic group and corrugated different political motive ranging from the individual perspective to the political parties. What is really wrong with Nigeria electioneering process is the wheel to be on power at all cost not minding the interest of the masses, every political party that is on power want to retain power for their selfish interest, while doing this, they map out strategies that will enable them to rig the election either by crook or hook, this things are not mostly peculiar with the Nigeria system alone but is common due to the fact that most of the leaders even come out openly to declare their stands to fight with their last breath to win election. During the campaign of the last election the immediate past President Chief Olusegun Obasanjo once stated that Peoples Democratic Party (P.D.P.). Will surely produce the next President no matter the hurdlesâ€ with this, one will quickly deduce the fact that the election was a charade because INEC has been tailored along the line of P.D.P. candidate even if the party brings a weakling as their presidential candidate, in this regard the job of INEC is to deliver the favoured candidate of the ruling party P.D.P. as the President of the country.

It is also on record that most states won by P.D.P. are manned by P.D.P. governors and all the other parties lost their bids in such states, while in some states where we have other party, such party also won in their states, take for instance in Lagos State Alhaji Asiwaju Bola Ahmed Tinubu delivered its state to Action Congress (AC) while in Abia State Uzor Kalu delivered its state to Progressive Peoples Alliance (P.P.A.) in Imo state, P.D.P. did not win the state not because they don’t have the machinery, they intentionally lost the state because they are not in favour of the so called P.D.P candidate hence they drafted another member of the party (P.D.P.) to Action Congress (AC) in other to win the election, this said candidate will soon decamp to its original party Peoples Democratic Party (P.D.P.)

Political malpractice has taken a new dimension in the history of Nigeria, most of our religious leader are now praise singers of politicians, they have ignore their vows and responsibilities to the people by preaching the gospel which proffers rather to rain encomium on politician(s) who come to their congregation for thanks giving to God. Religions leaders should play their role of lordship over these politicians, they should chastised any dubious person that warrant such in other to cleans the society from bad eggs, charity they say begins at home it is the responsibilities of our religious leaders to call their congregation to other and imbibe in them good norms and morals.

The Independent National Electoral Commission (INEC) is an institution empowered by the 1999 constitution to conduct election in Nigeria, as an umpire the institution is supposed to be truly independent in other to conduct a free and fair election, the commission over the years as shown to the public that is not capable of conducting a free and fair election, this is manifested in the series of election held in the forth republic, INEC as always jilted the electorate by playing the script of its employer. The commission cannot hold a credible election in the present circumstance if the mode of appointments and their funding is not changed, the National Assembly should legislate through a bill empowering the judiciary to appoint members into the board of INEC, this should be people with credible and unquestionable character without affiliation to any political party. Most of the problems we have with INEC is that, these people are members of the ruling party and their mandate is for them to protect the interest of their political party according to their party constitution and in the other hand to build confidence of loyalty to those who appointed them as members of the commission, nothing good can come out of a corrupt mind and as it were a spade is always a spade. For us to correct our electoral system INEC must be restructured, all its activities reconstituted, the President should not have any power over the Chairman of the commission rather the Chairman should be accountable to the National Assemble while the mode of funding should also be direct to the Commission instead of waiting for the executive arm of government to execute projects, if this measures are put in place Nigeria electioneering process would be sanities to a large extent.

Bribery is another cancan worm that has eaten deep into the electoral system, a lot of people are involved in collecting gratification from the politicians thereby selling their conscience and their votes, it is due to the fact that the economic situation is not stable, there is a lot of people dying of hunger and starvation in our communities, this is common in the past election most people even go to the extent of thumb printing on ballot papers throughout the night when official voting as not started, this is a cardinal point of rigging an election using the INEC officials to supply voting materials to top politicians in a particular area, hence a resident electoral commissioner of INEC would visit a big name (Politician) in its territory of jurisdiction as a mark of loyalty to pave way for smooth flow of their corrupt tendency perpetuated at the pulls.

Tuggery is rampant in the aspect of our youths, today most politicians have tugs whom they use to disrupt election and steal ballot boxes from pulling stations, this are jobless youths who are trying to earn a living from dubious antecedents, these are the same youths who they use in carrying out their nefarious activities ranging from political rallies, political assassination etcetera. The masses are appealing to such youth to desist from their evil way and turn a new leaf otherwise nemesis will cash up with them, most of the time this same politicians use and dump such youth, it is high time for us to protect our votes and work ceaselessly to protect our nascent democracy.

STEPPING DOWN OF ELECTED OFFICIALS

In this regard all elected officers ranging from the Presidency, the Governors to the Local Government Chairmen should step down before the general election is conducted, this due to the fact that, such officials have influence over the election in their respective domain, they have the power to hijack the electioneering materials thereby dictating the area where ballot boxes would be  sent to and not to be sent, in the past election most pulling boot did not receive election material because of fear of losing the area, while the passive area of their victory will be well furnished with electoral materials. This is done right from the inception of taking statistics of eligible voters in the area to the time of registration through the period of the election proper, base on this points raised, I suggest that all elected officials should step aside three months or at most two mouths to the period of the general election. This will also go along way in solving the problem of intimidating any resident electoral commissioner from doing a thorough job thereby conducting a free and fair election.

1.3 OBJECTIVE OF THE STUDY

SCREEN SHOTS OF THE APPLICATION 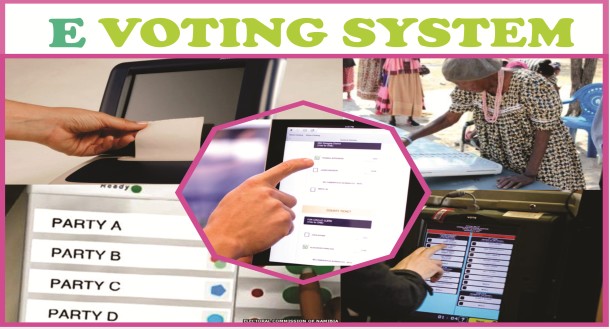 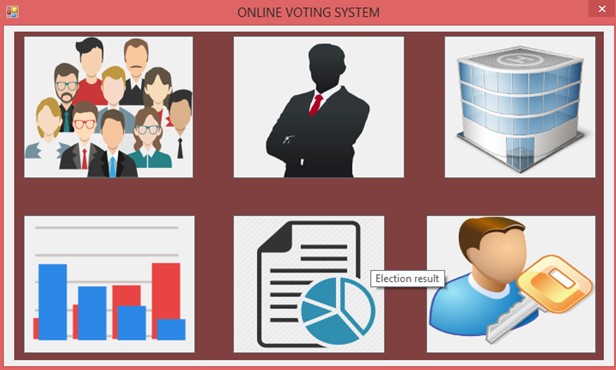 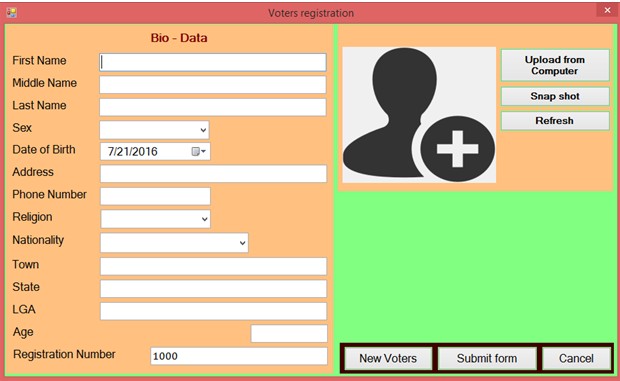 1.6 SIGNIFICANCE OF THE STUDY

The significance of this study was to help and give a benefit to the student, business marketers, school management, company, and other places that need this system.The system would improve the monitoring capacities of those who maintain the system.

1.7 LIMITATION OF THE STUDY

This research work will concentrate on the implementation of the system to see how it works and how it can be used.

1.8 ASSUMPTION OF THE STUDY

During the process of data collection, information relating to Electronic voting System was obtained from the internet and other Library materials. Hence, it is assumed that all the data collected are correct and contains no false information.

Disclaimer:
Using this Service/Resources:
You are allowed to use the original model papers you will receive in the following ways:
1. As a source for additional understanding of the subject.
2. As a source for ideas for your own research work (if properly referenced).
3. For PROPER paraphrasing (see your university definition of plagiarism and acceptable paraphrase)
4. Direct citing (if referenced properly)
Thank you so much for your respect to the authors copyright.

A Framework for National Integration of Biometric Information